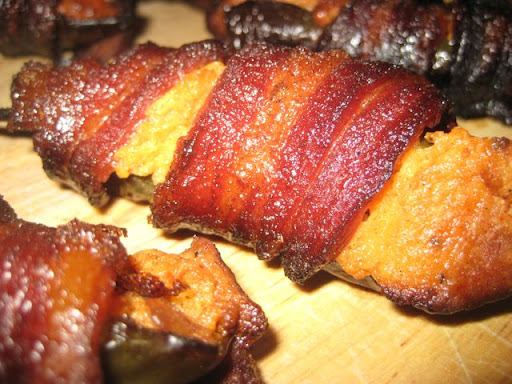 On February 20th this year, we got dumped on. Again. I had just gotten some home cured, home smoked bacon in from my buddy Bob at work. He goes all out and brings in cooler with pre-portioned 1lb ziplock baggies of bacon. It's a beautiful thing. Bob inspired/inspires me to stuff and smoke meat. Anyway, his bacon is also beautiful and seems to enjoy getting dredged in brown sugar and wrapped around cream cheese stuffed jalapenos. During the calm before the storm I tossed a handful of them along with a fatty on the smoker for a little evening snack for the family.

The arduino powered UDS kept the temps steady while the weather picked up and left a pool of melted snow on the lid. The snow was coming down down fast enough that it sounded like rain as it near vaporized. I don't know what it is about inclement weather and smoking meat, but I really enjoy it. Probably has something do with getting out off the couch and doing something somewhat productive in the middle of it all. I get the same feeling getting up predawn to get some meat on while the temps hover around zero.

I put this rub on just about everything I put in the UDS. Mix everything together with a fork. I store it in a pickle jar with a bunch holes poked in the lid (ala Alton).

Mix the rub and cream cheese in bowl. Scoop it in to a zip lock and cut one of the bottom corners off. Use it like a piping bag and squirt a blob in to each of the halved and cored jalapenos. Some folks add a lil' smokie cocktail wiener too. Then wrap each one with a piece of bacon. Finally dredge each wrapped, stuffed jalapeno in the brown sugar. Smoke at 225F to 250F for about an hour or so until the bacon is as crispy as you like it.

Unwrap the log (try to keep it in log form). Coat the outside of it in the rub. Smoke at 225F to 250F for about an hour or until internal temp is 165F. We like to toast up some English muffins, slather on a shmear of cream cheese and add a couple slices of the fatty.