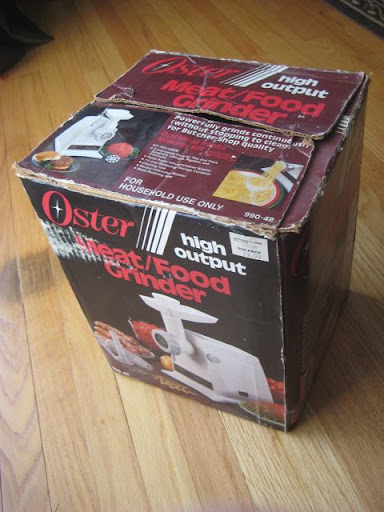 Last summer my buddy gave me a meat grinder. This past January we finally got around to making some sausage. My step-dad, brother-in-law and I made pretty quick work of about 40lbs of pork shoulder. Lots of laughs and only one injury.

The meat grinder ground meat very well. While stuffing the sausages we were plagued with suction and heat issues. The fat started to break down a little bit as the process was pretty slow. After we they got a little rhythm going (with them on the stuffer and me on the camera) the meat was a-flowin.

After everything was cleaned up (found some pork chunklets stuck on the wall) we cooked up a foot or so. It was fantastic. We purposely went a little heavy handed on the fresh ground black pepper and were rewarded with a Polish sausage bursting with garlic (fresh minced and powdered) followed by a peppery bite.

Make a hydro-stuffer. I asked the big brain for a more efficient way to stuff sausage and eventually stumbled upon the hydo style stuffers. It's a piston that uses the water pressure in your house (about 50psi) to push the sausage through the horn. Brilliant! There's a commercial version for $150, but I think we can make one for about $50. There's some great examples of giant, vertical water stuffers crankin' out the meat on youtube. All powered by same amount of water pressure.

Trim pork in to three classes of fattyness. Polish sausage recipes call for different ratios of 3 different fat levels in your pork. We trimmed everything to one level. The sausage was still excellent.

Sneak up on the seasoning additions. We also made some Italian sausage. I think I messed up the recipe because it was over-the-top seasonings and no one wanted to eat it.